The repair and replacement project at the docks consists of three phases, costing about £11m.
28 March 10:
New flood defence gates weighing 50 tonnes each are due to be installed at Bristol’s historic docks in the next few days. The steel back-up lock gates, known as leaves, travelled 1,000 miles from the Deest shipyard in the Netherlands. They arrived in Cumberland Basin this evening. The gates will replace 140-year-old Victorian wooden lock gates at Junction Lock. They were specially built by Dutch shipyard and construction company Ravestein. They will be taken into Junction Lock by pontoon barge before being lifted into place by a 500-tonne crane. Work is expected to finish on Wednesday. 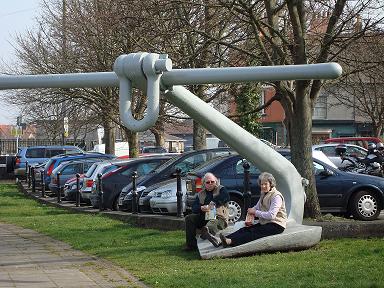 Couple having a picnic on an anchor