Update1 Nov: Still holed up at Avonmouth
Update31 Oct: The tow started before 2 and left the Basin lock at 3pm 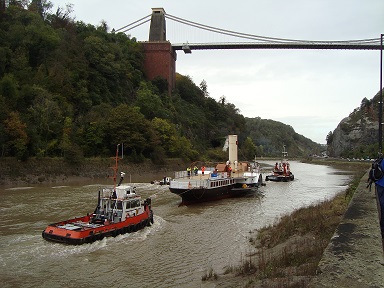 She then holed up at Avonmouth as she did not pass Battery Point
Update 29 Oct: I have been informed that the tow is planned to start on Thursday 31st October at 1400 hrs. They can not leave the Cumberland Basin lock before 3:15. This will depend on the weather conditions and is subject to change. The tow will head for Falmouth first before ending in the Medway.

Update24 Oct: The boat crossed the dock about 9am 24 Oct. The next stage will be next week sometime as massive storm expected Sunday. 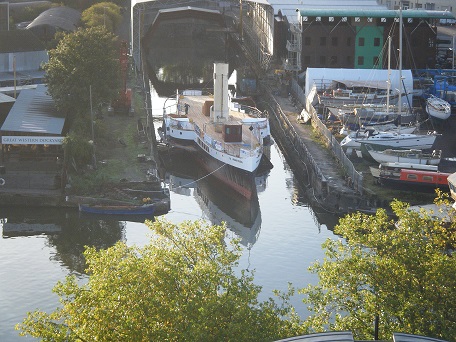 Update21 Oct: The boat is ready to leave the dock. Access to the gang plank has already been removed. Depending on the weather, the Medway Queen will be towed back as soon as there is a two day window to get to Newlyn the first safe point.
There must be less than a force 5 wind (19 knots) down the Severn estuary to set off, so she may not set off until next week.

11 October 2013 The tug “Christine”, operated by A. J. and A. Pratt of Rainham, has been contracted to tow “Medway Queen” back to Gillingham and is now on her way to Bristol. When she arrives and all necessary surveys are complete and certificates issued Medway Queen will be towed out of the dry dock, manoeuvred through the locks and onto the river Avon. This and subsequent phases of the operation will be entirely dependent on both weather and tides. These factors are beyond anyone’s control although the tides at least are predictable. You can follow the Christine’s progress back to Gillingham on www.marinetraffic.com/ais. They are expected to take an inshore route along the South Coast and for those who don’t already know, search for the “Christine” (UK registered tug), not for “Medway Queen”.
http://www.vesselfinder.com/?p=1765 also shows Christine if marinetraffic does not!

The date and time of arrival in Gillingham are dependent on operational requirements and will only be predictable by following the tug’s progress; it is expected to take an inshore route along the South Coast. Our estimate is around 5 days after leaving Bristol given good weather. Medway Queen’s arrival at Gillingham Pier will be a major event for the area and we are planning this in three stages:

30 September 2013: Though the docks are full of water, she is not ready to go. They have inclined the ship and need to produce stability info before MCA will issue a loadline exemption. 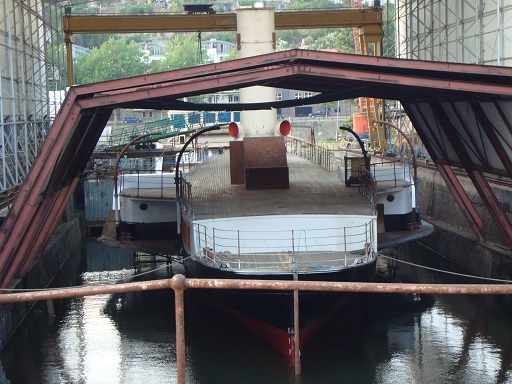 27 July 12-5pm: To mark the end of this phase of the project a re-dedication ceremony will be held at the dockyard on Saturday 27th July. This represents an eagerly awaited milestone in the restoration and it is also a significant event for engineering in the UK.

The Albion Dockyard (Hanover Place, Bristol BS1 6UT) is not far from the SS Great Britain, and will be open to the public from 12 noon on Saturday 27th July until approximately 5pm, admission free. A short re-dedication ceremony will be performed at approximately 2pm. After the usual speeches Evelyn, Emelia, and Elizabeth, daughters of Andrew Summerell (MD Albion Dockyard Ltd.), will re-dedicate the ship. The sluices will then be opened and flooding up of the dock will commence. This is a lengthy process and it is unlikely that the dock will be completely filled in the course of the afternoon. After the dedication it is hoped that members of the Medway Queen Preservation Society will be able to tour those parts of the ship that are safely accessible. All of these arrangements are subject to operational conditions at the yard remaining favourable of course. The weekend of the 27/28th July is also the Bristol Harbour Festival weekend, with a huge variety of interest and entertainment just a few minutes walk from the dockyard. Even more reason for coming to Bristol and wishing Medway Queen well.

The ship will not be leaving the dry dock immediately. There is more work to be done in preparation for the tow and then the tug has to be available and the weather outlook acceptable. When these conditions are all met the ship will be moved without further ceremony. Predicting exactly when this will happen is not possible but the MQPS website (www.medwayqueen.co.uk) has a page dedicated to the “tow home” and details will be posted there as they become clear.

21 March 2013: We made our third visit to the Medway to inspect progress since she is due to leave the Albion dock at the end of April.

Aug 2012: Psychologically, the installation of the engine in August was probably the most significant event.