15 Aug 2018 Many of you will be aware that planning consent has been obtained to redevelop the derelict Macarthurs Warehouse site, which is located on Gas Ferry Road near the SS Great Britain. Demolition work will commence on Monday 20th August 2018 and be ongoing until 17th December 2018. The path between the derelict site and Rolt’s Boatyard will be closed for this entire period and pedestrians will be diverted via Cumberland Road.
21 June 2017 17/03139/F | Demolition of existing warehouse and associated buildings and structures. Redevelopment to provide a mixed-use development of 147 residential units, workspace and a cafe with ancillary gallery space (Use Classes C3, B1, A3) and associated car parking, servicing, landscaping works, provision of utilities and other supporting infrastructures (Major).
Comments in by 14 July 2017
I presented a statement on behalf of BIAS, mainly on the concerns of height and style in the historic City Docks conservation area, and protection of commercial use of the Albion Dockyard in view of the fact that roof terraces had been added, and flats had only one aspect which were facing the dock, some flats directly overlooked the Albert Dock and Rolts boatyard. For noise mitigation, residents would have to shut their windows for the acoustic glazing to work. The Central Area management policy specifically states that the proposal should maintain the viability of the commercial use of the Albert Dock. If the industry is unable to continue in a viable form at the Dockyard it will have a disastrous effect on the remaining maritime industries in the harbour. New residents may try to stop work in the boat yard because of noise. The Albert Dock is the only dry dock left in Bristol, has been operating since 1848 and is grade II listed. There was a conflict since the site had been allocated for housing.
Originally the applicant had stated that it was not viable to provide affordable housing, but the city valuer had worked out that 27 should be provided. There had then been negotiation to provide 18 units. The committee did listen to my arguments, and they asked the planners for clarification. They did not care about the appearance of McArthur and thought that copper cladding looked very industrial so did not want to re-use the red bricks either, Seven stories high also seemed to be acceptable. They were however concerned that the dock industry should be protected. They tried to find out if it was possible to stop residents from complaining about noise. There was a test case with the Ministry of Sound in London. All one could do was to warn potential residents that the site could be noisy. They thus had the choice between heritage and affordable housing. They were nearly minded to refuse the application but then someone proposed to change the affordable housing to 27 units since they objected to the negotiation. In the end, six voted to grant, three against and there was one abstention.

20 sept 2016: A small notice has been fixed to the hoardings around the dilapidated McArthur’s Warehouse, advertising a public consultation event for the future of the building. The notice invites people to view the plans at Underfall Yard at the following times:

This is an informal consultation by the developer and precedes a planning application.

6 Jan 2014: Restore McArthur’s Warehouse and turn it into a community asset. This is an idea submitted to George Ferguson’s Ideas Lab and it quotes my ideas from 2005! What Julie Parker hopes to do is to raise awareness of this lovely old building, as she feels that all too few people are even aware of it. That could make it harder for the developers to get away with their current proposal to turn it into housing with the promise of some jobs as well (pressing all the right buttons).

It now needs people to comment and vote on it. The more votes and the more comments, the higher profile it will have, and the more likely people will see it. To vote, you need to create a login, but this is quick and painless.

28 Feb 2012: Linden Homes is considering ideas on how to redevelop McArthur’s Warehouse site on Gasferry Road. This site has a sorry planning history. 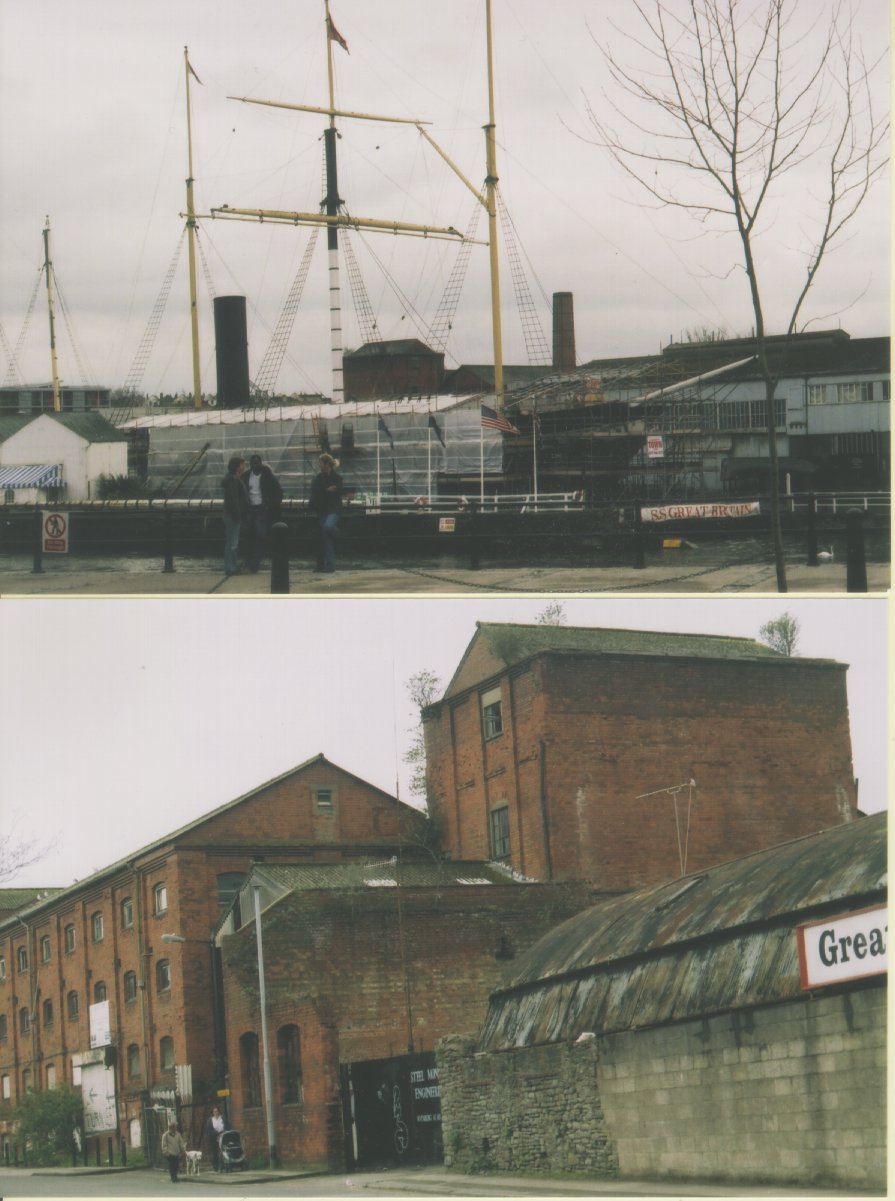 They have created a website www.mcarthursconsultation.com/. They are keen to begin an ongoing process consultation and encourage feedback from the local community. If you would like more details you can contact Nikki Davies on 0118 986 7704

2004: Planning Application 03/01463/X/C and 03/01464/F/C Planning Application 03/01463/X/C and 03/01464/F/C At the meeting on 16 March, the councillors voted to uphold their original approval, and thus demolish the warehouse. The demolition was agreed by the casting vote of the Chairman, Richard Eddy – the committee were equally divided. Predictable, but very sad.
After a very great deal of lobbying by the Civic Society, the chair Richard Eddy agreed to reconsider the application at the committee meeting held on Wednesday 16 March. The 10 page report is now on the web and recommends demolition despite the Secretary of State, the Government of the South West, English Heritage, Civic Trust, and the original recommendation of the Central Development Committee report in February 2004.
14 March Read my letter that I have submitted, demonstrating the weak, contradictory arguments for demolition
Evening Post 14 March 2004
Bristol Civic Society is furious over the latest move in a planning wrangle over a redbrick derelict Victorian warehouse near the ss Great Britain. Councillors are being advised to confirm a controversial scheme to tear down McArthur’s Warehouse in Gas Ferry Road and replace it with a complex of three buildings up to five storeys high around a courtyard to provide offices, homes, upmarket bars or restaurants and service shops. The civic society has come up with its own plan to retain the warehouse, which it believes sets the scene for Brunel’s masterpiece nearby.
An original scheme by Quada developers was given approval by the council’s planning committee in September 2000. But before the official approval notices were sent out, the scheme was “called in” by the Secretary of State and a public inquiry was held. The four-day hearing was unusual because the council’s planners, who backed the scheme, found themselves cross-examined by the main objectors – the civic society. The outcome was in favour of the Civic Society and therefore planning permission was refused.
Quada drew up a revised scheme with some modifications, including reducing the maximum height of buildings from seven to five storeys, which was submitted to the city council in May 2003 and not discussed by councillors until eight months later. English Heritage revealed that it was drawing up a report which was assessing the possibility of saving the warehouse and converting it. The council’s planning officers suggested deferral so demolition could be further examined. But councillors gave approval, subject to conditions.
This prompted the Government Office for the South West to put planning approval on hold and it was later called in for a second time. A second public inquiry was expected to be held in February 2005, but English Heritage withdrew its objection on Christmas Eve, which led to the call-in being scrapped. The power to give planning permission has now been returned to the council’s planning committee, which discussed the issue on Wednesday.
Planning officer Ian White says in a report there are no new matters which warrant the councillors changing their minds from previous decisions. But Stephen Macfarlane, of the Civic Society, is furious that a second public inquiry is not going ahead. He said: “If we had been told earlier, then we could have mounted our own case against the scheme. “It’s not a bad building which is being proposed – it’s just in the wrong place. This site is so important because it provides the backdrop to the ss Great Britain. If the buildings are too high, then the ship is lost. McArthur’s Warehouse is so important because it is end-on to the ship, whereas the developer’s scheme is to utilise all the dockland behind the ship. We fought this case at the first public inquiry and won. But now we’ve had the rug pulled from underneath our feet. What’s happened is absolutely disgraceful.”
Mr White says in his report that the background work which was done in preparation for the second public inquiry included the viability of saving the old warehouse. This led to a consultant’s report which said the warehouse detracted from the character of the area. He said English Heritage withdrew its objection after a partial collapse inside the warehouse which led irs officials to believe that its retention and conversion was only “marginal at best” and therefore not worth fighting at a public inquiry.
We would urge all BIAS members who object to the demolition of the former Bristol United Breweries maltings, more recently MacArthur’s Warehouse, and redevelopment with 6 storey offices and residential flats in the manner of the Point, to attend and voice their objections. This is a historic industrial area and should not be ruined. It should also stay as an industrial area. At the very least, write to Steve Gregory, Bristol City Council, quoting the above reference numbers making sure your letter arrives before 12 noon Tuesday.
Michael Woodman-Smith of CHIS would be pleased to provide members with further information, and details of the new material which we have obtained since the committee decided to allow the redevelopment last year. This includes the report commissioned by English Heritage which establishes the viability of the retention and restoration of the warehouse which we believe would create the best setting for the SS Great Britain. We have produced extensive 3D imagery of the proposed redevelopment (both before and after), together with in addition the proposals by SS Great Britain Trust to redevelop their own site with further 6 storey housing.
McArthurs Warehouse Application

The enquiry about MacArthur’s Warehouse will not now take place in February 2005. The Secretary of State has handed it back to Bristol City Council. CHIS (Clifton and Hotwells Improvement Society) are trying to get it reconsidered by the Planning Committee.

Michael Woodman-Smith will be meeting with Civic Soc again in next few days re MacArthur’s. They are lobbying to get the application reconsidered by the Planning Committee so that new information and objections can be heard.

This is a historic building directly behind the Great Britain, is one of few original warehouse buildings left in the docks and has associations with Brunel and should not be demolished. Pictures of warehouse and from across the river.