Belgium Pit is situated at 16 Duncombe Rd, Speedwell. This is the corner site diagonally opposite Bristol Brunel Academy, formerly known as Speedwell School. The pit was a ventilation shaft for the nearby Speedwell and Deep Pit collieries. It is not shown on the 1840 tithe map (see Bristol Know Your Place webs site), is shown on the 1880 OS plan and is shown as disused on the 1900 OS plan. Both OS plans show some buildings and a shaft. It is believed that the site was cleared and built on in the 1930s when the rank of shops in Duncombe Road was built. 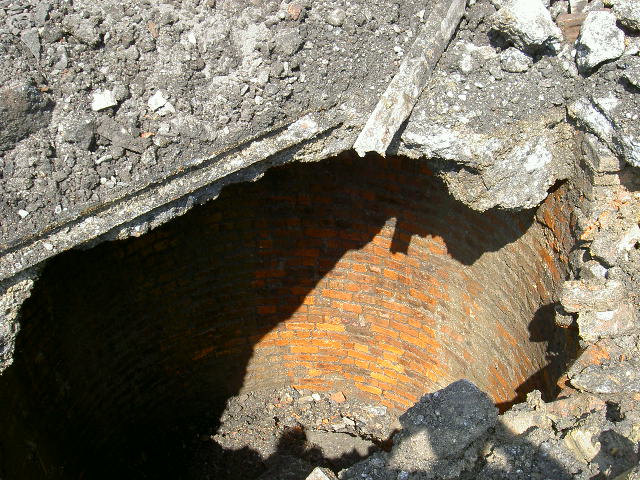 I was contacted recently by the site manager who was responsible for the demolition done on behalf of Sun Developments Ltd. He was most helpful and provided information and photos for which permission is given to reproduce here. After the demolition of the structure above ground we dug out the foundations to prepare for the new build. During this exercise we excavated to approx. 1m below existing Ground level, approx. 1.3 below path level. The top 1m. was rubble fill on stiff clay. No foundations were found that did not relate to the buildings we had demolished. We did uncover the Mine shaft on the North side of the site. We took several photographs of the area. The shaft was approx. 3m in dia. and filled to approx. 3m. from the top. The shaft was capped with concrete with old railway tracks imbedded within it, this was removed and disposed of. The perimeter of the shaft was 225mm. brickwork and the shaft was circular. It was suggested the 3m. gap between the underside of the cap and top of fill was settlement. The fill was firm as we tried to push it with the bucket of the 13t excavator. We excavated the top of the fill and it comprised of broken brick and debris. We expect whatever buildings were on the site when the shops were built were demolished and used to fill the shaft as the debris in the shaft matched the bricks on the shaft wall. On advice from the Coal Authority, the shaft was filled with 75mm. clean stone. The position of the shaft was recorded. It is good to have the co-operation of the Sun Developments in sharing this information with us. The 1929 date stone from the demolished building is in store with the intention of re-useing it. Planning application 13/03636/F has now been submitted for redevelopment of the site. Comments by 2nd October 2013. No archaeological survey has been performed

The report by the officers cites the objections from SGMRG and BIAS, and the city archaeologist recommended standard conditions for archaeological investigation prior to work starting if permission was granted.

The main reasons for rejection was the size and mass of the development was unsuitable for the area, and no proper risk analysis had been provided for a site with known coal mining activity.

Recently Ken Kemp noticed that 16 Duncombe Road had been demolished, the site levelled and fenced off. He spoke to the JCB driver on site and found out that the shaft had been found and the Coal Authority had done some remedial work. Remains of footings of buildings may have been found, but all was covered now with a blanket of stone and gravel.

On checking planning applications, he found a permission was granted in 2009 for flats on the site, with a condition that an archaeological survey and recording was done prior to commencing work. This planning permission lapsed in 2012.

He contacted Bob Jones, city archaeology officer, who confirmed there was no existing permission for redevelopment of the site, but a demolition order was issued in March 2013. He agrees the site is important and will recommend the same condition on archaeology if a new planning application is made. Little is known about Belgium Pit, so it is important that any remains are at least recorded, if not actually conserved.

Since at the present, there is no evidence of redevelopment work, and demolition was done legally, there appears no action can be taken by the city officers. There appears to be a weakness here in the preservation or recording of archaeological remains. There would be nothing to prevent the demolition contractor destroying the archaeology, either deliberately or unintentionally, as part of the site clearance while demolishing the existing 1930s building.

I will try to keep the site under observation to see if development starts, in which case the planning department can act. If any one else notices any thing significant on the site, please contact me.
Ken Kemp ken@ken9kemp.plus.com